Playground games have been a staple of our society for hundreds if not thousands of years – whenever children play together outdoors or on a playground, they often devise intriguing, fun and challenging games that they can play together as a group. Games such as these help develop a child’s cooperative skills, their communication, and their ability to play in an appropriate manner with others of their own age.

Although our world is becoming increasingly dependent on digital technology, it is important to teach our children the importance of outdoor play. Teaching them playground games will greatly improve their development, and also help them keep fit and active. The list below contains 10 of the most popular children’s games that are perfect for use in a playground, school yard or public park. See how many of them you know, or have even played yourself!

One of the true classics; Hide and Seek has been played since the late 19th century and many different variations of this game exist. This game is perfect for the playground, especially one that has many obstacles such as a climbing frame so that children can hide behind or on them. The premise is simple – one child who is "it" closes their eyes and counts to a predetermined number (usually 100). The other participating children then run off and attempt to find the best hiding place possible. When the counter has reached 100, they must then find the hiding children. The winner is usually the child that is found the last!

Another favorite that has been played for generations; capture the flag is a game that tests children's agility, speed, and ingenuity and is perfectly suited for a playground environment. The main objective of the game is to capture the flag – this could be something as simple as a jumper tied to a stick! Two teams are formed and each team choose their “base”; this base is a safe area and could be the top of a climbing frame, or a swing-set for example.

Each team has a flag that is held within their base, and they must strive to capture the other team’s flag without being caught. Many different rules exist of this popular game, but usually, if a player is caught, they have to remain within their base until the next round. A pre-determined set of rounds is usually chosen, and the winning team is the one that has captured the opponents flag the most.

Also known as “it” and “tig", tag is a game of chase and is one of the simplest playground games in existence – no equipment is needed, and it can literally be played anywhere where there is open space. One child is selected as "it" and their aim is to “tag” the other players – a tag is usually achieved simply by touching another player. Variations of this game exist, but once a player is tagged, they usually become “it” or are eliminated. Tag is popular due to its simplicity and its promotion of physical activity and movement in children.

Another relatively simple game, foursquare tests a child’s reactions, concentration, agility, and ball handling skills. This playground game involves a square that is split into four individual squares of equal size that is usually drawn with chalk on any solid surface. Four players participate, and each stands in their own square. The aim of the game is to successfully bounce a ball into another player's square, whilst defending your own square.

In an example game, child A might serve the ball and bounce it into child B’s box, child B then has to bounce the ball back into another box without breaking the pre-defined rules. Bouncing rules usually define that the ball cannot be caught, cannot hit the central lines, and cannot travel outside of the overall playing area. 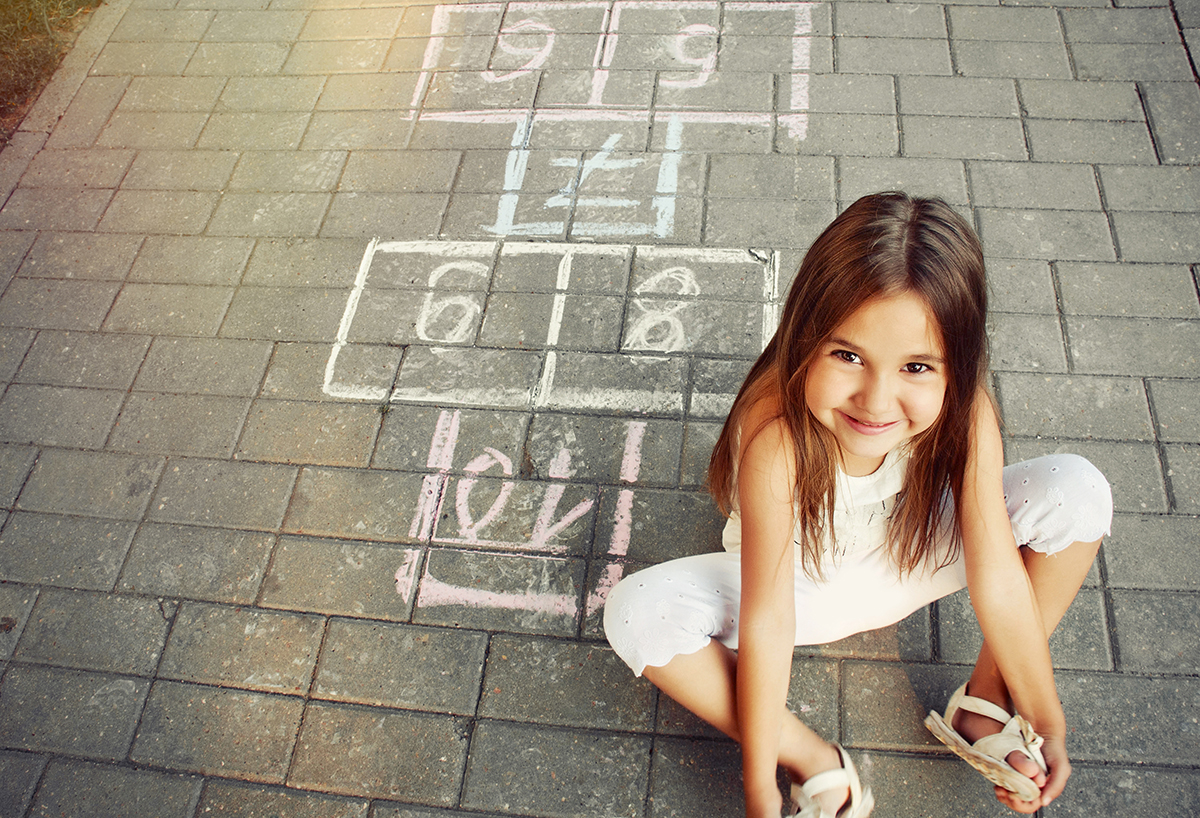 Hopscotch is possibly one of the oldest playground games in the world and records have shown that some variation of the game was played as far back as ancient Roman times. Like foursquare, hopscotch involves a playing field drawn on a playground surface that is made up of various grids (the formation of the grids can vary greatly). A child has to throw an object into one of the grids (which are usually numbered) and then proceed to “hop” across the grid and retrieve the object – popular objects include bean bags, stones or coins.

There are many different variations of hopscotch that are unique to different cultures, but usually, a child must not touch any of the lines and must retrieve their thrown object using a set sequence of hops. This game is a great way to develop a child’s balance, hand-eye coordination, and memory skills.

This playground game has many different names but the rules remain the same – One player is selected as "it" and it is up to them to control the flow of play. The remaining children form a line usually 15ft away from the controller. The child that is “it” faces the opposite way and starts the game by shouting “Green Light!”. The other children must then move towards this player and attempt to tag them.

Although not as popular in modern times, marbles is still a fantastic game to play and helps children improve their hand-eye coordination skills. To play this game, a child must have a collection of marbles and a “shooter” marble that is usually larger than the others.

The playing area consists of a chalk drawn circle approximately 3ft wide and can be played on any solid surface. Each child places some of their marbles into the center of the circle. The children then take turns to "fire" their "shooter" marble from outside the circle to see how many marbles they can knock outside its perimeter – any marbles that land outside are kept by that player and counted at the end. The winner is the child that has successfully knocked the most marbles outside the circle!

Skipping can be played by a group of children or alone and is a fantastic game that develops a child's muscle strength, timing, rhythm, and coordination. All you need is a skipping rope and a large enough area to safely swing the rope without causing disruption to others. Children can skip on their own and practice different moves and rhythms, or they can use a longer rope and take it in turns to either swing or jump. 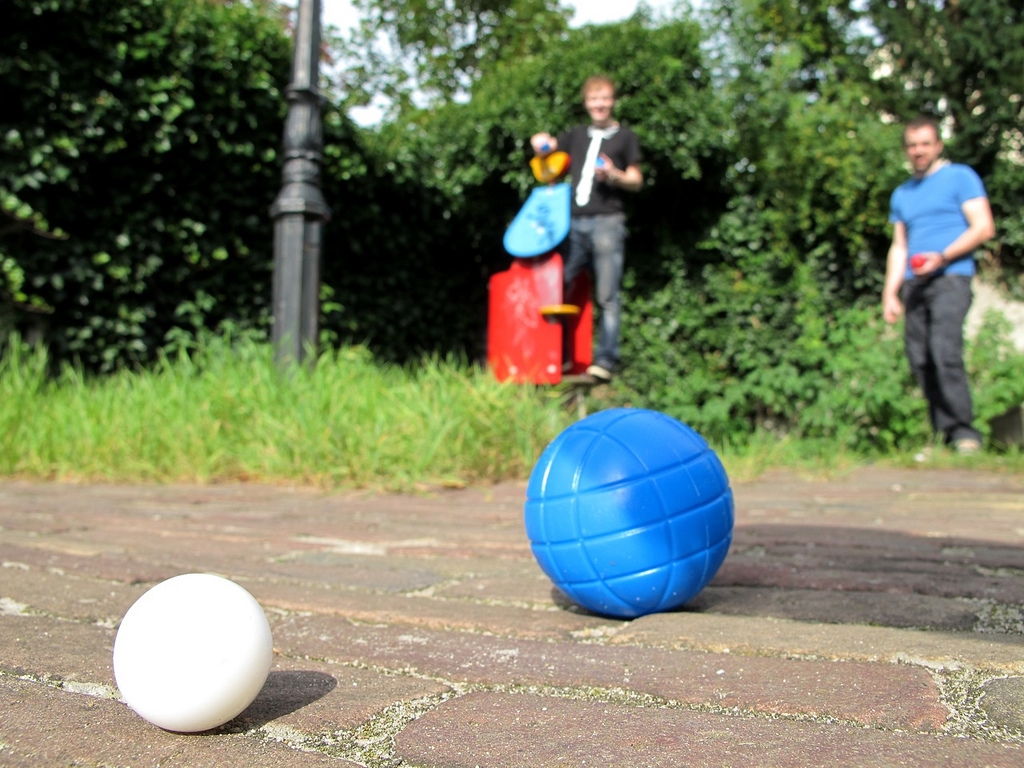 This ball toss game is similar to Petanque, Boules, and Bowls and has been passed down for generations from the times of the Roman Empire. Each player has a set of bowls and there is also a “jack” (this is usually a smaller ball that is a different color). The Jack is thrown at random, and each player has to throw their bowls as close to the Jack as possible. The winner is the child that is closest to the Jack once all the bowls have been thrown. This is a simple game to play and helps improve a child’s throwing and measuring skills.

A hugely popular playground game particularly in the United States, Dodgeball is a fast-paced ball game that involves attempting to literally dodge the ball! The game usually consists of two opposing teams, each of which has a series of balls. The two teams line up at opposite ends of the court and attempt to eliminate the opposing team by throwing the ball at them. If a player is hit on any part of their body, they are considered to be out until the next round. For younger children, soft balls are used to eliminate any injuries.

There you have it – 10 amazing children’s playground games that are sure to keep the younger generation entertained and active for hours on end! Have you played any of the above games? Do you have any fond recollections of hours spent on the playground? With this top 10 list, you can pass these past-times onto your children for their own enjoyment.